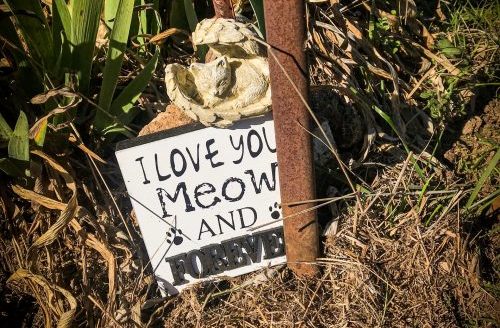 It comes to us all. That time to say goodbye, and the brokenness of the word. It is so final, yet we cling to hope that we will see our loved ones again someday.

I do not care for death at all! It turns my stomach and makes me so ill at the prospect of losing someone that I love, that I try to avoid the topic completely until I am visited again by death’s cold touch, like a slap to the face!

And the cruelest of all, I think is that I must decide to take life away. When in most cases it is considered kindness to end the suffering of a loved pet, I feel the burden of it weighing me down. It is not an easy decision that one makes quickly. The deeper the suffering is, the easier it seems to make that choice. But it still seems too cruel at the same time. I know that many have had to do this for their pets and they can say they felt better after a while. It is a decision one must live with for the rest of their life.

How do you begin to say goodbye? I think it has to be gradual and intentional. You have to choose the right moment if you are given the time. You have to prepare yourself for the inevitable absence of your beloved pet. For me, I spend a lot of quality time with my pet. I tell them how much I love them, and how thankful I am for their companionship and faithfulness. And I tell them how good they have been for me and that now their task and journey are complete and it is time to let go. I cry and hold them. Once, a beloved cat, put his paw on top of my head as I cried as if to say that I would be ok and, to let him go. Almost, like he was blessing me. I also take videos and lots of photos, and sometimes I will record their purring. I have also clipped fur to save and have taken paw print impressions to keep their memory alive in clay.

It might be morbid to do all of this in advance, but you never know how long you have with your pet. Pets do not live for a long time. That to me seems like a curse too. I have had to say goodbye to too many loved pets in my life. I say that I will never get another one, only to give my heart away again and again. Why? Because animals enrich our lives. We are better people when we are loving and kind to someone who can not return the same degree of love and care. But is that really true of our pets? Don’t they reciprocate and also return our love back to us 100 fold? Of course, they do. That is why we give our hearts to more pets after we lose it to another’s passing. We know that the unconditional love and respect of a pet far exceeds anything we can give back. And we know that animals are better than us. We do not deserve them.

In choosing to end the life of a pet there are many things to consider. I always choose to look at the quality of life, versus the quantity. An animal that is older in years can still have many more good years left as long as their quality of life is good. I can’t perceive to take away a life based only on the fact that they are old and not as spry as when they were younger. If they make an occasional mess on the floor I can dismiss that. It happens to the best of humans too, we are not as young as we once were and we are all aging. Why would you want to kill a sweet innocent soul, based on a few incontinent moments? But once the pet is not able to care for their most basic needs, such as eating and drinking and defecating in the proper places or needing help to get in and out of the litter box, then it is time to think about the possibility of euthanasia. I have moved a special turkey back and forth from one end of my property to another; moving her into the shade and to her water and food, because she had gone lame. I did not want to put her down, because I felt that even though she needed a lot of help to get around her quality of life was still not so bad, where she was suffering. It was not always easy to have to move her around. She was not a small bird! but, as her health began to really fail she did lose a lot of weight, and I knew her time was coming. She actually made the decision for me. But another beloved turkey who had also gone lame did not have a good quality of life. I would move him in and out of his coop and around the yard too, But he developed a bacterial infection under his wings and it was apparent that this was going to cause the other birds to get sick, as well as me. I had to put him down myself. That absolutely killed me! I was a mess for a few weeks after that. Yes, I knew he was not going to live a good long life. But the trusting eyes, looking at me, as I pulled the trigger to end their spark, still haunts me. He was only 4 months old.

Every time I have had to take a pet to the veterinarian to have them put to sleep has been traumatic to me and to the pet, as they are laid unwilling onto a cold metal slab and stuck with a long needle as the painful fluid is injected into their veins, and they cry out in pain right before they succumb to the lethal medication. But the very last time, which is also why I am writing this blog, I had a different experience. I still do not like the decision I had to make in the least, but the experience was far better in the end. And my beloved pet was able to rest after 3 days of being wide awake crying in pain as he tried to crawl around the house. When we arrived at the clinic we were immediately sent to a back room with a couch. We did not have to wait in line with all the other pet owners. The two dogs barking loudly were drowned out once the door was closed and we were able to spend a few more precious moments with our beloved. We were given a wireless doorbell to ring once we were ready to say goodbye. They took him to the back to place a catheter into his arm and then brought him back into us, never leaving the safety of the basket surrounded by the blankets and our home scent all around him. He was completely at ease. He was not bothered by any of the other animal scents or sounds. He was not crying or squirming, or anxious. He was so calm that when they gave him the first sedative he only let out a small meow. I think that it was because the fluid was cold entering his body. I understand from experience it is a little uncomfortable. But he never tried to pull away from the staff working on him. He closed his eyes and then they gave him the last injection that ultimately stopped his sweet-heart. He never had to leave the basket or his blankets. We were all surrounding him and petting him as he took his last breath. His head went down into the blankets, with the smell of home all around him. And when we buried him I could see that he was at peace. His arm was naturally curled around his head as he would do when he would sleep. He was not sprawled out, as some of my other pets were when they were put down, fighting the needle. He was just at rest. It was so natural.

My heart is still very shattered in his absence. He was with me for 18 long years. I had him from his conception. He was born in my home on November 11, 2001. He went through a divorce with me and a new marriage, and 3 big moves, as well as the loss of his brother Judah on July 28th, 2013, and the loss of our child on April 9th, 2014. He was here for our adoption of our son on February 27th, 2019. He was so sweet and a faithful friend who just “got me” He knew exactly what I was thinking. When I would ask if he was hungry or thirsty, he knew how to reply. In his younger years, he was very persistent in his needs being met. He was always hungry. But as he got older he knew my rhythm and he knew how to wait for me to make him his breakfast or dinner. I hope that he understands why I had to go back on my promise to not take his life. I had told him to do it and not put me through the agony of making the decision. But when we love someone so much we sometimes have to make the choice to set them free. And that is what I had to do. I had to let him go. I loved him too much to let him suffer as he was. I have also given God thanks for giving me this time with my cat. He gave me a sweet life to love. He gave me a long time to give Dominoe love too. Just two years shy of two decades. I am very thankful for this time that I have had. It still makes his absence all the deeper, because that is huge chunk of my life and story that is missing today. Saying goodbye is never easy. I think it is how we choose to do it that makes all the difference.